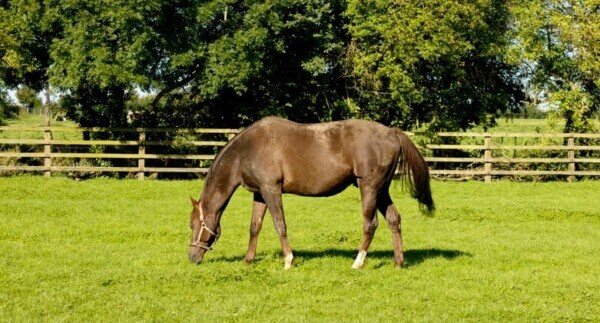 The National Stud Farm in Kildare is the only stud farm open to the public in Ireland. Photo: Chris Hill for Tourism Ireland.
Reading Time: 4 minutes

Would you like to race your own virtual horse, especially if it's like the famous thoroughbreds that have been produced in Ireland over the decades?

This news story and page contain affiliate links and I may earn compensation when you click on the links at no additional cost to you.

If so, you'll get a chance to do that and more at the The Irish National Stud & Gardens in County Kildare, where the Irish Racehorse Experience is housed.

The interactive experiential attraction, which re-opens for the tourist season on Jan. 30th, is the recent recipient of a Thea Award for Outstanding Achievement from The Themed Entertainment Association.

The international non-profit association represents the world’s leading creators, developers, designers and producers of compelling places and experiences around the world.

The Irish Racehorse Experience was among several other international attractions to receive Thea Awards.

They include the Jurassic World Adventure at Universal Studios in Beijing, China; Star Wars Galactic Starcruiser at Walt Disney World, Orlando, Florida; Particle Ink: Speed of Dark in Las Vegas, and the Shanghai Astronomy Museum in Shangai, China, among others.

The stud farm is a 48-minute drive from Dublin and is considered home to some of the most magnificent horses in the world.

The interactive experience begins with the world's first steeplechase in Cork and recounts how Ireland and the Irish diaspora have become a world-leading force in the breeding, training and racing of horses.

Visitors can expect to be taken on a journey that includes the history and heritage of Irish horseracing and the thoroughbred industry right up to the point when visitors can choose their racing colors before race day.

The experience combines cutting-edge gaming technology along with live video, audio and graphics, allowing visitors to buy and train their own thoroughbred racehorse and to experience what a thrilling horse race is actually like.

Visitors can also take a free guided tour that explains the history of the stud farm, as well as the famous thoroughbreds that have been raised and trained here.

Spring is a popular time at the farm as that is when newborn foals take their first steps.

About the National Stud Farm & Gardens

Ireland's famous stud farm was purchased from the Fay family in 1900 by Colonel William Hall Walker.

The Royal Family enjoyed success with horses that were bred at the farm, the most famous one being “Sun Chariot,” a thoroughbred that achieved a Triple Crown success for King George VI.

In 1943, the Irish government took over the land and buildings.

There's much to see there, including the beautiful Japanese gardens, created between 1906 and 1910, and St. Fiachra's Garden, which was opened in 1999 to celebrate the millennium.

The garden is named after St. Fiachra, the patron saint of gardens. Its design is based on Ireland's rich monastic heritage.

Daily guided tours of the stud farm are available during the peak season every hour beginning at 10:30 a.m. and ending at 4 p.m.

At other times of the year, they run every two hours.

Admission to the stud farm, gardens and Irish Racehorse Experience is €17 for adults, €9.50 for children between the ages of 3 and 16, with children under 3 admitted for free.

You must book online beforehand.