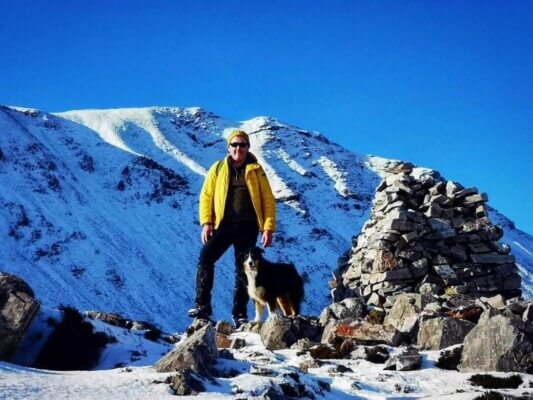 Updated September 2021: While its tourism board has done much in recent years to publicize the county’s natural beauty, the beauty of Donegal is getting an additional highlight from a cute border collie named Iggy and her owner, freelance photographer James O’Donnell. 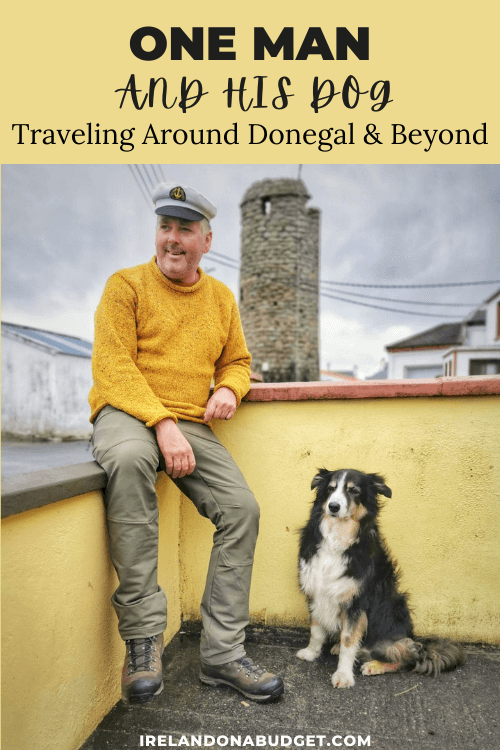 This post and page contain affiliate links and I may earn compensation when you click on the links at no additional cost to you.

The duo (affectionately known as “Meself and Herself”) have been racking up fans on social media for the past couple of years and in the process, have become Donegal’s best tourism ambassadors.

James, a Falcarragh native, has just published a calendar of photographs that document his walks and hikes with Iggy and of course the beauty of Donegal.

It includes the county’s most spectacular scenery, as well as some adorable pictures of Iggy as well.

She is the star after all! (Sorry, James!)

Putting Donegal on the Map

To get an idea of Donegal’s reputation as a tourism destination, you only have to turn the pages of Lonely Planet’s “Ireland” guide.

It is also on the Wild Atlantic Way, an approximate 1,500-mile driving route that begins in Malin Head in Co. Donegal and ends in Cork.

It showcases some of the most beautiful scenery in Ireland.

And of course, it’s all true. James and Iggy have shown their fans, many of whom come from all parts of the world, what Donegal is made of.

“We love getting out on hikes mainly, but beaches/dunes are a favorite too,” said James, who left London 11 years ago to return to his home place.


“We are so lucky to live in a place where we can choose so many different walks. There are rugged coasts, beaches, clifftops, rivers, lakes, country lanes, and local woodlands to enjoy. But definitely, it’s up on the hills where we love it most!”

There’s plenty of hillwalking to be done in Donegal, which borders Counties Derry, Fermanagh, and Tyrone, with a small part of it touching County Leitrim.

James and Iggy have climbed Errigal, which is the highest of the Derryveagh Mountains, as well as Croaghgorm in the Blue Stack Mountains.

To get an idea of how this partnership began, it’s important to go back to April 16, 2011, when Iggy arrived in Falcarragh from a farm in Co. Cavan.

She was 9 weeks old at the time.

After settling into life in Falcarragh, James said Iggy quickly became his sidekick, traveling with him wherever he went.

“There has never been a day when Iggy decided she wanted to stay at home,” he said. “I just say, ‘walk?’ and she’s at the door in seconds waiting for me!”

A year later, James took Iggy on her “first big hike” to Errigal Mountain, beginning a trend that would take them to various parts of Northwest Donegal and begin their quest to highlight the beauty of Donegal.

At first, they went by themselves.

But as word got out, they naturally became unofficial tourist guides, showing visitors around the most beautiful parts of their beloved county.

James and Iggy have also been known to frequent the odd pub here and there, as well as recommending dog-friendly places to eat and stay.

James said he didn’t’ take to social media at first, at least not until a photo he took of Iggy went viral on the Reddit platform.

“It was really mad,” he said, referring to the overnight success that turned Iggy into a social media sensation.

James described the windy day when he took the photograph at Ballyness Bay, which is close to his home.

“It was dry, but the wind was hitting us from all directions, and my plan was to just get to the pier and come straight home. But when we landed, I thought I’d get a quick shot of Iggy up on the small hill in the bay with the wind blowing her coat,” he remembered.

Just as James was about to take her photo, Iggy yawned, allowing the self-taught photographer to capture the moment perfectly.

“Her tongue hangs out normally when she yawns, but the wind caught it and it flapped back toward her ear! It was a very funny moment.”

Later that evening, James posted the photo to his Instagram feed, and as they say, the rest is history.

“I didn’t know what was going on until a friend on Facebook told me that he’d spotted Iggy on the front page of Reddit,” James added.

The friendly dog had made it to number 5 on their top global news feed that day. The photo was later posted to Imgur, an online image-sharing community.

“That’s where it all kicked off,” James said.

Today, James and Iggy have more than 25,000 followers on Facebook and over 11,000 fans on Instagram, and the demand for news of their adventures just keeps growing and growing.

When James started taking photographs of Iggy in Donegal’s many spectacular settings, he couldn’t have imagined the interest it would attract.

But that was nothing compared to the outreach he received when Iggy needed two hip surgeries following a freak accident in 2018.

Unbeknownst to James, a friend had set up a crowdfunding page in the U.S. to cover the cost of the surgery.

In a matter of hours, $800 was raised to help fund the surgery. A further $2,000 was raised in one day for the second operation.

James has been overwhelmed by the generosity.

“When I looked at the list of names of those who had donated, I was amazed to see names I didn't even recognize and some were also local to me,” James said of the “lovely gesture” that was established by a fan in Milwaukee.

Last summer, he carefully monitored Iggy’s recovery, bringing her back to the veterinarian for additional surgery when she experienced a setback.

A Bright Future Ahead

Asked how he captures Iggy and the scenery so well, James said it’s been pretty easy because she is a true natural with the camera.

In Donegal, there’s so much beauty around that it’s not difficult to capture Iggy and the scenery at the same time.

“It’s happened so many times, where I’d turn to look for her and a photo opportunity would just arise! She’s mostly ahead of me on walks, so I’m eyeing up shots quite a bit, but at the same time, enjoying the scenery myself.”

Based on their popularity on social media and on the many requests from fans around the world, James has created a second calendar that includes some of the best shots of Iggy in Donegal’s iconic places, as well as other places in Ireland that they've traveled to over the past year.

The first calendar was launched at the end of 2019. His 2022 calendar will be on sale shortly.

Asked for recommendations beyond his hometown, James said he often encourages visitors to take a trip to Tory Island, which sits off the Falcarragh coast.

“We have so many beaches to enjoy locally too and just up the road there’s a great selection of mountains to climb,” James said.

Two of the attractions that James recommends that highlight the beauty of Donegal are the Glenveagh National Park and Ards Forest Park, as well as the Poisoned Glen in Dunlewey.

James said many of the people who reach out to him online have discovered a newfound interest in Donegal after following them on Facebook and Instagram.

The future is looking bright for the pair. They even featured recently on RTE”s daytime show, Today, last December.

In addition, James and Iggy are currently filming a documentary with an award-winning filmmaker.

“We started our journey together and have ended up somewhere now, that was unimaginable back then,” James wrote.

“Exhibitions, embassy visits, meeting world-famous photographers, an interview at one of the most prestigious photography galleries in the world (NYC) – these planned events are all being rescheduled (in the US) because of the current situation.

Huge thanks to Elliott Erwitt, Samuel Holmes, and Fiona! I give Iggy the best life I can, and the return has been phenomenal. There are life events, and there are silver linings.”

Once life gets back to normal, James is also looking forward to bringing hikers out on their first-time climbs of Donegal's mountains.

“The local hills and surrounding landscapes are a hiker's and photographer's dream,” he added. “For me to combine both hobbies and turn them into a business has been just fantastic!”

Since this blog post was first published, James has gotten a little companion for Iggy in the form of Frida, another cute Border Collie who is currently learning the ropes from her older counterpart.

Colette is a County Sligo native who created Ireland on a Budget to provide her readers with money-saving tips on how to get to Ireland and then save even more when they're there. She's a professional copywriter who lives in the New York area with her husband and two children.

Stunning Scenery, History and Heritage Part of My Donegal Travels

Six Days in Donegal: Exploring Its Most Spectacular Locations