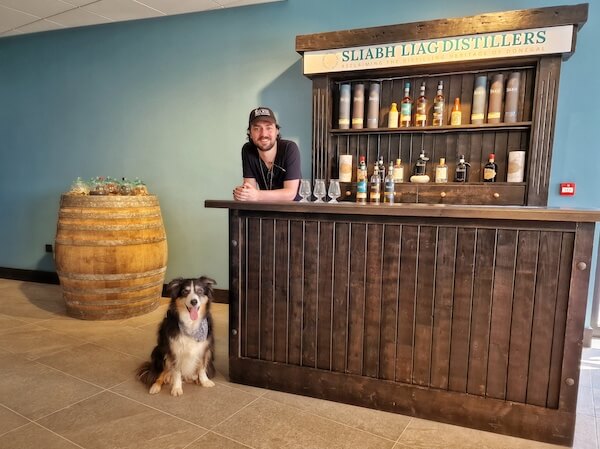 Established in 2017 by James and Moira Doherty, Sliabh Liag Distillers was the first to produce whiskey in the county after an absence of over 175 years.

Since then, the couple and their team have been busy creating several award-winning whiskey, gin, vodka, and poitín brands — now sold in 26 countries, including the UK and the U.S.

“James has a deep sense of ancestry for the region given that both his grandfathers were poitín makers not far from Ardara,” said O’Donnell, who is among “Donegal’s Living Legends” that the company supports.

His James and Iggy brand, with its 33,000 Facebook and 13,000 Instagram followers has helped elevate the company worldwide and in particular, The Legendary Silkie Irish Whiskey.

Its blend of double and triple-distilled single malts, soft grain whiskey, and a hint of peated malt is inspired by tales of mythical Silkie seals off the County Donegal coast.

Tour guides will recount the distilling methods once used by Donegal’s whiskey producers during a time when whiskey distilling was illegal.

They will also explain how the company has taken those old methods of whiskey distilling to inspire the creation of a new and distinct smoky-style spirit brand using modern-day distillation methods.

The price of admission for tours without a tasting is €15, and €20 for the tour and tasting (either whiskey or gin). Children ages 8-18 years of age are admitted free of charge. Children under 8 are not allowed on distillery tours.

Since the property that the distillery has been built on is a working farm, dogs must be kept on leads. Only assistance dogs are allowed inside the facility.

Given that Iggy is fully trained, she is allowed off-leash inside and outside the distillery for photo shoots.

Visitors to the distillery can purchase one or more of the Ardara Distillery brands. The shop is open from 11 a.m. daily.

They are also available on the Sliabh Liag Distillers online shop.