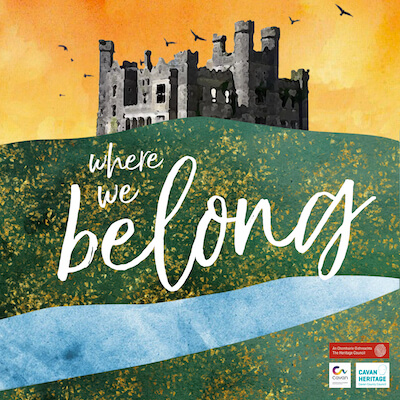 The popular Cavan Heritage podcast is back and it promises to be better than ever!

Titled “Where We Belong,” the podcast, which is commissioned by the Cavan Heritage Office and directed by local documentary filmmaker and actor Alan Bradley, delves into a vast range of topics related to the arts, nature, history, and culture of Cavan, often referred to as the Lake County.

Bradley, who has appeared in numerous international commercial campaigns, said the podcast was a big hit when it first aired back in 2021.

Listenership, he explained, has been strong among Cavan residents, but it has also come from fans across the world.

That includes listeners in the United States, the U.K., Canada, Ethiopia, Germany, South Africa, and Sweden, as well as reaching Number 9 in Austria's history podcast charts.

Some of the topics that you can expect to hear in this season include a fascinating conversation with award-winning actress and Cavan native Derbhle Crotty in the Town Hall Cavan and an intimate chat with a Crosserlough couple who recalled their childhood memories of the infamous “Big Snow of ’47.”

Other episodes include insights into Cavan’s wetlands with ornithologist Heather Bothwell, a thrilling visit to St. Mogue’s Island packed with mythology and folklore, and even a quick stop off at a Buddhist meditation center tucked away in Bawnboy.

Bradley said he had a particular interest in recording stories from the past, including memories from “The Big Snow '47,” a pivotal event in Ireland at the time.

How the Project Evolved

Bradley explained that Anne Marie Ward, a Cavan Heritage officer, reached out to him during the Covid-19 lockdown with the idea of exploring Cavan's heritage in podcast form.

“During that difficult time, people were more isolated than ever before so we made the podcast with the aim of bringing them closer to Cavan and celebrating the rich heritage the county has to offer,” he said.

“It went down really well so we decided to record a second series which is out now.”

Bradley added that County Cavan's heritage is perfect for such a podcast.

“Cavan people are great storytellers so that helps a lot when working exclusively with audio,” he said.

“There’s a wealth of heritage and culture in the county that is somewhat untapped so it was exciting to get to bring all of that to the public and make it accessible to all.”


What to Expect in the Second Season

Bradley said the stories in this new season of the Cavan heritage podcast cover subjects from other parts of the county that were not covered before.

“We’ve been across the length and breadth of Cavan recording our episodes,” he explained, regarding one of his newest projects.

Others include Unspoken, which highlights the experience of Irish men with eating disorders, and “Seán,” a documentary film on the life of Meath GAA legend Seán Boylan.

“It’s particularly lovely to hear from Cavan emigrants abroad who say the podcast helps them feel closer to home. We are hoping to build on that for season 3.”

Where We Belong Season 2 is now streaming for free on all podcast streaming services including Apple Podcasts and Spotify.

Tourists interested in visiting Cavan in 2023 should plan their vacation around The Cavan Calling Festival, which will take place between July 27th and 30th. More information can be found on the festival website.