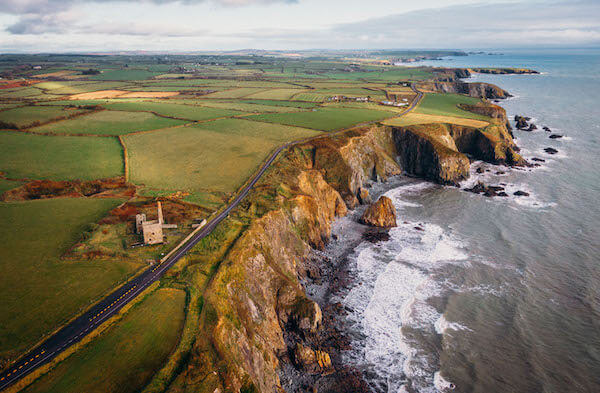 The beautiful Copper Coast in County Waterford, named one of the Top 100 “offbeat” places to visit in the world. Photo courtesy of Celtic Routes for Tourism Ireland.
Reading Time: 4 minutes

The beautiful Copper Coast in County Waterford has made it to the Top 100 in Lonely Planet’s latest guidebook, “Offbeat Places.”

The new book includes destinations around the world that offer an alternative travel experience where “tourists are few and far between” and that provide “crowd-free, under-the-radar” alternatives to the world’s busiest places.

The travel book will no doubt be of particular interest to tourists seeking sustainable, eco-friendly attractions in Ireland.

By clicking on the Amazon link above, I may earn a small commission from the Amazon Associates Program, but only if you decide to buy something on the site. However, you will not incur any additional costs by doing so.

Why Visit the Copper Coast?

While the Wild Atlantic Way has been stealing the limelight for several years now, the Copper Coast in Ireland’s sunny southeast is equally awe-inspiring, with a coastline that has been molded by millions of years of natural forces.

The region stretches for about 25 km (15 miles) between Kilfarrasy to Stradbally, an area that includes picturesque seaside villages where stunning cliffside views, beautiful beaches and secluded coves are the norm.

The region is named after the copper mines that operated in the area during the 19th century and today is part of a UNESCO Global Geopark.

What to Do in the Region

Most visitors stop at the Copper Coast Geopark Visitor Centre in Bunmahon to get an overview of the region’s geological history as well as its archaeological and social heritage.

There are also several self-guided walks that visitors can take in the park.

In addition to the natural wonders of the Copper Coast, visitors can still see the ruins of 19th-century lime kilns and engines, as well as a storage yard and chimneys from the old copper mines that once provided employment in the area.

Tankardstown was the most notable of the mines in the area, operating from about 1850 through 1879 when they were sold.

Many of the families who had depended on the mines for a living emigrated to the United States, with many of them relocating to Montana, where they found similar work.

Some of the region’s favorite attractions include the remains of a 13th-century castle and a 4,000-year-old burial place at Dunhill, as well the Copper Coast Geological Garden in Bunmahon, where you can explore a geological time path of the area and see two ancient Ogham stones that are aligned with the summer solstice.

Take a 3D Tour of the Underground Tankardstown Mine

Top Things to Do on the Copper Coast

While the region is small, there’s still plenty to explore. Here are some of the activities that tourists can avail of.

Power also offers a more in-depth tour and a seaweed-inspiring cooking class in her home.

Nature created the perfect place for photographers to capture the amazing sea stacks and other gnarly rock formations on the Copper Coast.

Visitors will find them at Kilfarrasy Beach, Bunmahon Beach, Stradbally Cove, and at the 3-mile-long (4.8 km) Tramore Beach.

Learn About the Geology of the Region

In addition to learning a lot about the Copper Coast’s geology at the UNESCO Visitor Centre in Bunmahon, visitors are encouraged to seek out the region’s dolmens, promontory forts and geological wonders like the Pipes of Badbh at Knockmahon, similar in many ways to the Giant’s Causeway in Northern Ireland.

Endulge in a Seaweed Bath

After a long day, a seaweed bath at Sólás na Mara (translated to Solace of the Sea) is a must.

Visitors can enjoy a hot bath of freshly piped seawater with the addition of seaweed.

The seawater at this popular spa, located in County Waterford's only Gaeltacht/Irish-speaking region, is retrieved daily at high tide and then filtered to purify the bath water.

Seaweed baths have been popular in Ireland since the turn of the 20th century because seaweed naturally contains iodine, calcium, magnesium, and Vitamins E and F, all great for the body.