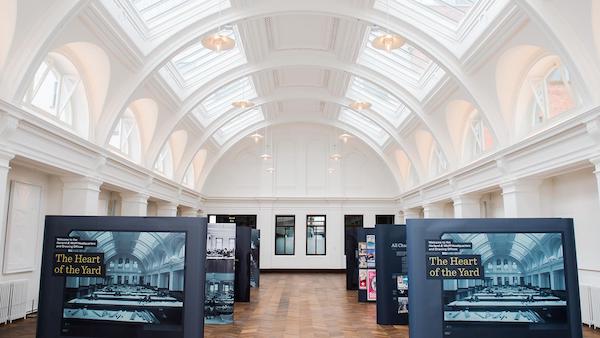 Did you know that the Titanic Hotel Belfast was once the headquarters and the site of the historic Drawing Offices of the Harland & Wolff shipbuilding company?

The hotel, which is close to the popular Titanic Belfast, is celebrating its fifth anniversary this month.

The hotel is just one of several attractions across Northern Ireland — and Belfast — that are taking part in the European Heritage Open Days (EHOD) project from Sept. 5-11, which offers free access to scores of attractions across the province.

The hotel's exhibition is being set up in a space that was once one of two drawing rooms used by naval architects and draftsmen who used the space for the design of the Olympic ocean liner in addition to the Titanic, and Britannic.

The large windows provided the maximum amount of natural light needed for such detailed work.

Tours of the heritage rooms are routinely offered at this popular hotel.

Highlights include access to Lord Pirrie’s Office, who once served as chairman of the company, as well as access to “The Corridor of Power,” which includes meeting rooms and the office of Thomas Andrews, the Titanic’s chief designer who went down with the sinking ship.

Afternoon tea is also available for guests and visitors to the hotel.

The European Heritage Open Days initiative, which is being launched under the presidency of Irish Ambassador to the Council of Europe Breifne O'Reilly, is a way for countries across the continent to celebrate their cultural heritage and promote well-being, tolerance, and peace.

This year’s theme is “Sustainable Heritage: Learn Use Enjoy,” which encourages visitors to consider the environment and its impact on a country’s heritage, including their actions at tourist attractions and how climate change is impacting environments across the world.

The Republic of Ireland did its part through the country’s National Heritage Week celebrations in August, providing free access to its heritage sites.

In Northern Ireland, you can visit more than 200 historic buildings and monuments, landmarks, and hidden gems spread across the province.

Guided tours and lectures, living history re-enactments, and musical events are just part of the weeklong series of events.

Get Wifi Across Ireland (Use code COLETTECONNOLLY to get 10% Off)

Some of them include the Knockmany Passage Tomb attraction in County Tyrone; Cultra Manor in County Down; the Armagh County Museum, The Navan Centre & Fort, and Castle Coole, among others.

Read More: 10 Hotels in Belfast that are Worth Staying In