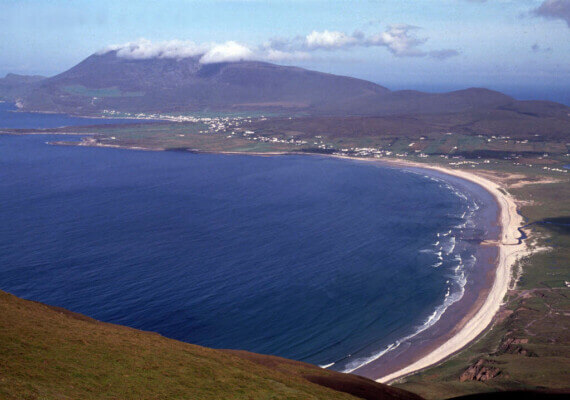 Achill Island, the largest of Ireland’s offshore islands and on the Wild Atlantic Way, is basking in the glory of some well-deserved media attention.

Not only was its Keem Bay beach selected as the Number One “Wild Swimming Spot” in the UK and Ireland, but the region served as one of the filming locations in the soon-to-be-released movie, “The Banshees of Inisherin.”

The island of Inishmore, the largest of the Aran Islands, was the other location chosen for the movie, directed by Martin McDonagh.

The Beauty of Keem Bay

The nod to Keem Bay is based on the results of a survey carried out by the reusable bottle company, Ocean Bottle.

The results were compiled based on E.coli and intestinal enterococci samples from over 800 waterways, as well as a cross-referencing of each waterway’s Google ratings and reviews.

Keem Bay’s clear turquoise water and its plastic-free sands all contributed to it grabbing the top spot and making it a “beautiful, rural and picturesque spot to enjoy a swim,” said the company.

In 2021, Lonely Planet also singled out the beautiful County Mayo location in its Top 20 Beaches in Europe, describing it as “gloriously remote.”

Read More: 6 of Ireland’s Offshore Islands to Visit: From County Antrim to Mayo

The new Martin McDonagh film is part comedy/part tragedy and brings together Irish-born actors Brendan Gleeson and Colin Farrell who first hit it off professionally in the movie, “In Bruges.”

The film tells the story of a pair of lifelong friends living on a remote island during Ireland’s Civil War and finding themselves at an awkward point in their relationship when one of them no longer wants to be friends.


In essence, both are on different sides of that conflict.

The island’s beauty has drawn filmmakers to Achill before, including in 1999 where the movie “Love and Rage” was shot; “The Daisy Chain,” made in 2008; and “Secrets of the Cave,” made in 2006, among others.

Locations in Achill Used for the Movie

Several well-known locations on Achill Island were used for the filming. They include the following:

The stretch of road, from Cloughmore to Dooega, known as the Atlantic Drive, offers some of the most dramatic coastal scenery in all of Ireland.

From the drive, visitors can see the uninhabited Achillbeg and its promontory forts, and to its west, a smaller piece of land that houses another fort called Dúnnaglas, all of which date back to the Iron Age.

Another similar fort is also visible on Atlantic Drive. It is known as Dún Bunafahy.

The vantage point that overlooks Ashleam Bay is a popular stop along Atlantic Drive. The bay consists of a pebbly beach that is surrounded by steep, rocky cliffs.

The fishing village of Dooega, part of Achill’s Irish-speaking community, is home to a beautiful Blue Flag beach, one of five on the island.

For visitors who want to get a great overall view of the island, the drive to Minaun Heights off the Atlantic Drive is a must. It is Achill’s third-highest peak at 466 meters (1,528 feet).

At the top, visitors can see the beautiful 3-km-long Trawmore Strand (1.86 miles) and the village of Keel.

Perhaps the most widely shared of online Achill images is Keem Bay with its aqua blue waters and what was once the site of a basking shark fishery.

As mentioned above, Keem Strand is a popular swimming location.

Its gleaming white sand could surely match any tropical location.

Shoals of bottle-nosed dolphins and passive basking sharks are frequent visitors in its waters.

This lake provides the island with most of its water supply and can be viewed best on foot by visitors who choose to hike Croaghaun, Ireland's highest sea cliffs (higher than The Cliffs of Moher and Sliabh Liag in Donegal).

The preferred starting position is at the car park near the lake.

Other Attractions Worth Seeing in Achill and Surrounding Area

Located near Slievemore, the second-highest peak in Achill, this beautiful, deserted area contains between 80 and 100 stone cottages located over a mile-long stretch of road.

Archaeological research in the area has revealed signs of life from over 5,000 years ago. Other evidence points to a settlement during the early Medieval Period.

Check Out these Achill Island Tours

Achill Island was at one time the stronghold of the O’Malley clan (the same one that the Pirate Queen Grace O’Malley belonged to), and for that reason, they built a castle/tower house that is a popular attraction on the island.

Kildavnet Castle was located in a strategic position as it protected the entrance to Achill Sound and a passage of sea that connects Clew Bay with Blacksod Bay.

It is located along Atlantic Drive.