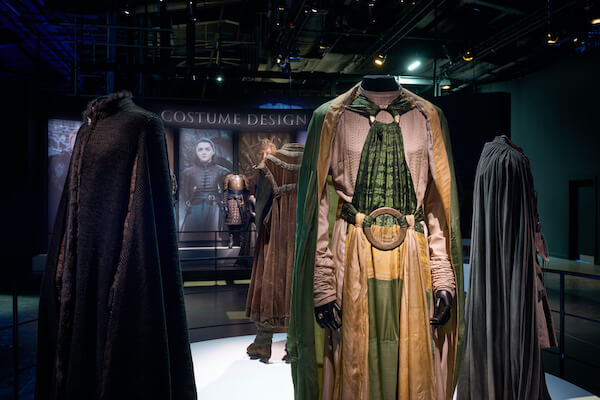 Some of the costumes you'll see in the new Game of Thrones Studio Tour in Banbridge, Co. Down. Photo: Tourism Ireland.
Reading Time: 5 minutes

If the Emerald Isle is on your bucket list in 2023, you might want to know about 7 new attractions in Ireland that are now open.

Here’s a look at the new attractions that are just waiting to be discovered.

This long-awaited attraction will no doubt thrill diehard fans of the popular HBO series.

The Game of Thrones Studio Tour opened in February 2022 in the Linen Mill Studios in Banbridge, Co. Down, not far from where much of the series was made.

Visitors can see the show’s original sets, costumes, props, and set pieces, bringing them close to the imaginary Seven Kingdoms from the series storyline.

To reserve tickets for the world’s only Game of Thrones studio tour, go to the tour website.

A 776-square-meter (over 8,000 square feet) wooden maze that officially opened in the Skypark adventure park in Carlingford, County Louth, during the summer of 2021 is sure to attract legions of new visitors in 2023.

Constructed from sustainable wood, the maze route can be altered through a series of movable gates, meaning there are lots of different ways to solve this fun game, which is suitable for adults and children.

In addition to finding a way out of the maze, there’s also the chance to discover more about some of the popular attractions based in this region of the country known as Ireland’s Ancient East.

Maze adventurers are asked to find 10 attraction points within the maze, including Glendalough, Blarney Castle, and Brú na Bóinne, where the famous Newgrange monument is located.

Book a B&B Vacation in Ireland with Aer Lingus

A new walk in County Carlow known as the Borris Viaduct Walk is now open and should be a popular destination for those who love the outdoors in Ireland and are interested in walking and hiking on the country’s many trails.

The highlight of this new trek is the spectacular 16-arch viaduct with gorgeous views of the Blackstairs Mountains and Mount Leinster.

This is another one of Ireland’s greenways set to be completed in 2023.

The South East Greenway will connect the Norman town of New Ross in County Wexford to the Viking city of Waterford, taking walkers through the beautiful south Kilkenny countryside.

Like many of the other newly established greenways around Ireland, this one is being constructed along the former railway line between Mountelliot and Waterford, crossing the River Barrow via the Red Bridge.

Its passenger service was discontinued in 1963, with freight services ending in 1995.

Much is known about Ireland’s patron saint Patrick, but have you heard about Saint Declan?

Declan was an Irish saint who lived in the late 5th century.

He was the founder of a monastery in Ardmore, Co. Waterford, named after him. It contains the remains of the monastery, as well as a cathedral, and is known as a National Monument.

Many scholars believe that he preceded Saint Patrick in bringing Christianity to Ireland.

The 115-km (71-mile) walking route links the ecclesiastical center in Ardmore and another in Cashel, County Tipperary, following a path that Declan would have taken to meet St. Patrick in Cashel during the 5th century.

Some consider this trail the “Irish Camin'” in the same vein as the Camino de Santiago in Spain, which encompasses several routes in Spain, France and Portugal and is considered among the great pilgrim trails in the world.

Book Your Rental Car in Ireland with Discover Cars

A new treetop attraction in County Wicklow called Beyond the Trees Avondale is sure to excite individuals and families looking for something cool to do in Ireland in 2023.

The highlight of the attraction located in the beautiful Avondale Forest Park, is a fully accessible, 1.3-km (0.80 miles) tree canopy walk that includes a 12-story wooden viewing tower where visitors can get fabulous views of the surrounding countryside and where thrill-seekers can slide their way down to the forest ground.

Read More: 21 Attractions in Ireland that are Incredible