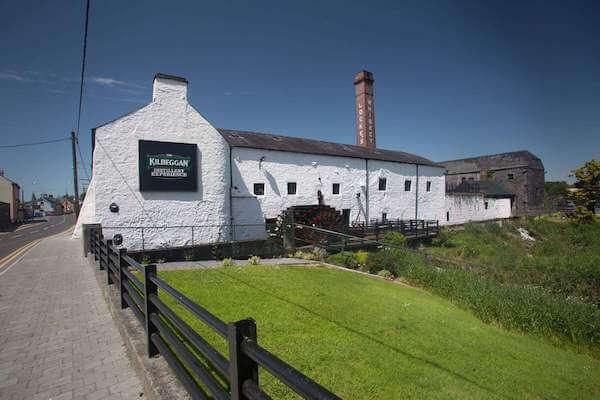 The exterior of the Kilbeggan Distillery in County Westmeath. Photo: Conor McCabe, for Beam Suntory.
Please follow and like us:

Did you know that there are over 40 whiskey distilleries in Ireland?

This post contains affiliate links, and I may earn compensation when you click on the links at no additional cost to you.

That's a whole lot of whiskey distilleries to visit if you're a whiskey connoisseur.

But even if you're not, there's no reason you couldn't include a whiskey distillery tour or two in your Ireland vacation itinerary.

If you’re enthusiastic enough to visit the 8 whiskey distilleries below, there’s a map and driving directions below that will help make the journey a little easier.

Be sure to click on the top right-hand corner of the map to view a larger version of it, where you'll find more details.

Visit the Irish Whiskey Museum in Dublin – only €20 per person

The Jameson Distillery Bow St is a favorite with tourists who visit Dublin.

While it’s not quite Ireland’s oldest distillery (the Kilbeggan Distillery in County Westmeath claims that right), it is the oldest in Dublin.

The award-winning distillery was founded by James Jameson in 1780 and by the turn of the 19th century had become the second-largest producer of whiskey in Ireland and one of the largest in the world.

A 40-minute tour will allow you to follow in the footsteps of its founder.

Be sure to go to the visitor center where additional experiences are on offer, including the 60-minute whiskey cocktail-making masterclass and the whiskey blending class.

Other things to see in Dublin: The Guinness Storehouse and Kilmainham Jail.

Save up to 55% on Dublin Attractions with the Dublin Pass

The late 18th-century building known as Slane Castle is where you will find the Slane Irish Whiskey Distillery.

The castle, which overlooks the Boyne River, has been home to the Conyngham family since the 1700s.

The distillery is located in the castle’s original stable block.

On its “Flavour of Slane Tour,” you’ll learn about the founding of the distillery. On the “Made in Slane Class” tour, you’ll get to craft your Irish coffee-making skills.

The Slane Special Edition whiskey pays homage to the castle’s reputation as a popular music venue, having hosted numerous high-profile concerts on its grounds over the years.

The Slane Batch Strength whiskey is a special distillery offering and is only available in-house.

Other Things to See in the Area: Newgrange, one of Ireland’s most popular prehistoric attractions; The Hill of Tara, and Mellifont Abbey.

Known as the oldest whiskey distillery on the island of Ireland, this is an attraction that you won’t want to miss, not just for the great-tasting whiskey but because of the heartwarming story that is told about the survival of Kilbeggan Distillery, which was founded in 1757 by Matthew MacManus but went bankrupt in 1954.

But of course, that’s not the end of the story, and you’ll need to pay a visit to find out more!

The “Distillery Experience” tour includes a visit to the old warehouses and a meet and greet with the company’s onsite distillers.

The 1 ½-hour tour finishes with a masterclass that includes a tasting of four unique Kilbeggan whiskeys. The cost is €30 per person.

The “Bottle Your Own Experience” does not include a guided tour but you do get the chance to fill your own 70 cl bottle of whiskey from the cask and complete your own special label by hand.

The distillery’s signature Kilbeggan Irish Whiskey is a combination of maize grain and malted barley, aged in oak casks, with traces of sweet oloroso plus sweet malt, giving it a woody oak tone.

Other Things to See in the Area: Belvedere House and Gardens and The Corlea Trackway Visitor Centre, which showcases an intact Iron Age bog road believed to have been constructed in 148 BC.

The story of Tullamore Dew whiskey is a true rags-to-riches tale.

Established in 1829, the brand owes its name to Daniel E. Williams, who worked his way up from the position of stable boy to becoming manager and eventually, the owner of the company.

The distillery’s name comes from his initials, D.E.W.

You can take a guided tour at the visitor center, known as the Old Bonded Warehouse, located on the banks of the Grand Canal.

The Distillery Experience tour will take you behind the scenes of the facility, from distillation to maturation while also meeting the people who work on the site each day.

You can also create your own blend of Tullamore D.E.W. to take home. The cost of the tour is €35 per person.

Other Things to See in the Area: The Charlesville Forest Castle, a Gothic-style mansion that is said to be haunted (ring the bell during the summer months for tours; at other times of year, email [email protected]).

A Taste of Ireland Delivered to Your Door

This popular whiskey distillery located in Ballina, Co. Mayo, was established in 2012 and is located on the banks of the Moy.

The double distilled single malt whiskey is reflective of the local landscape as local grains are used in its making as well as water from two County Mayo lakes, Lough Conn and Lough Cullin.

After the whiskey leaves the facility’s copper still pots, it is aged in American oak barrels that once held American bourbon, a nod to the Irish American heritage of its founders.

Tours and tastings are available at The Connacht Distillery.

They include the Atlantic Whiskey Experience, a guided tour of the working distillery as well as a tasting of the company’s traditional Irish poitín and blended whiskey, the first County Mayo malt Irish whiskey to be produced in over 150 years. Cost: €20 per person.

The Gin & Friends guided tour includes a tasting of poitín along with the distillery’s Irish gin and its Strawboys Vodka. Cost: €20.

The Drivers Tour includes a guided tour of the distillery for €10 per person.

Other Things to See in the Area: Belleek Castle, The Jackie Clarke Collection, Enniscrone, Rosserk Friary, and Moyne Abbey.

The Shed Distillery in Drumshanbo, County Leitrim, is a major tourist attraction in the area, not just for whiskey lovers but because the company also produces some of Ireland’s best gin, known as the Drumshanbo Gunpowder Gin, its most popular brand.

The award-winning distillery was established in 2014 by PJ Rigney — the man behind the Boru Vodka and Sheridan’s Liqueur brands in Ireland — and is in a former jam factory.

For only €19 per person, you can find out more about the company’s gin and thanks to a fully guided experience with one of its “curious ambassadors,” you can also get a tasting of the Drumshanbo Single Pot Still Irish Whiskey.

Distillers at The Shed say the un-malted barley gives the whiskey a unique spiciness and depth and the Irish barra oats add an elegant creaminess to the blend.

Other Things to See in the Area: Ireland’s first floating 600-meter (0.37 miles) boardwalk on the shores of Acres Lake and The Shannon Blueway. The boardwalk extends over the lake and is part of a 6.5-kilometer (4-mile) linear walking and cycling trail that ends in Battlebridge Lock near the village of Leitrim.

The Bushmills Distillery in County Antrim is one of Northern Ireland’s primary tourist attractions and one of the oldest whiskey distilleries on the island of Ireland (although not the oldest as mentioned above).

During the early years of production, the business faltered. In 1885, a fire destroyed the building, but it was quickly rebuilt.

Even though Prohibition dealt a severe blow to the Bushmills Distillery, it managed to survive.

The ownership of Bushmills has changed over the years. In 2005, the company was bought by Diageo for £300 million.

The living history tour describes the distillery’s grain-to-glass processes, taking you on each stage of the journey, from mash tun to pot still to barrel.

You’ll complete your tour in the 1608 Bar, tasting the company’s signature creations, including its original brand, as well as the Black Bush and Red Bush whiskeys.

Other Things to See in the Area: The Giants Causeway, The Carrick-a-Rede Rope Bridge and Dunluce Castle.

This old-fashioned distilling process involves heating whiskey directly over fire as opposed to steam to better help in the caramelization process as well as giving the Killowen Whiskey brands a fuller-bodied flavor.

Take a guided tour and learn about that process and other work that goes into the making of not only whiskey but also gin and poitín.

The poitín recipe is said to come from a family recipe that has been handed down for generations.

You can book a tour and/or order merchandise and Killowen Whiskey products on the company website.

Other Things to See in the Area: Kilfeaghan Dolmen, an ancient megalithic tomb that is part of the area’s rich history and The Ring of Gullion.

Read More: 10 Undiscovered Whiskey Distilleries in Ireland You Should Visit

Things to Remember Before You Embark on Your Whiskey Journey

Would you be interested in any of these 8 whiskey distilleries as part of your Ireland vacation itinerary? Let me know in the comments below.

Colette is a County Sligo native who created Ireland on a Budget to provide her readers with money-saving tips on how to get to Ireland and then save even more when they're there. She's a professional copywriter who lives in the New York area with her husband and two children.

10 Undiscovered Whiskey Distilleries in Ireland You Should Visit

8 Distilleries in Northern Ireland to Discover